For many of us in western North Carolina, one of the real joys of living here is being surrounded by so much beauty. The rolling hills, sheltering valleys and abundant plant life combine to form a kind of natural embrace.

​Hendersonville photographer Ruthie Rosauer is continually inspired by what she encounters in the mountain landscape, and she’s produced a new book focused on the beauty she glimpses in trees. Titled “These Trees,” the book is her “valentine to the arboreal world” - the product of a lifelong passion for all things tree-related
Hendersonville resident Ruthie Rosauer is an avid tree lover who has taken thousands of photos of trees across the U.S. over the past six years. A new book highlights the best of her photos paired with poems by 20 writers.
​(Photo by Beth De Bona/Special to the Times-News)

It wasn’t until Rosauer — a New Jersey native — and her husband moved to West Texas many years ago that she realized the importance of trees to her, both artistically and spiritually. “I literally wept for the first month in Amarillo,” Rosauer said. “There were virtually no trees, except for native mesquite and cottonwood trees.”

Despite their best efforts and a substantial investment in saplings, nothing grew in their yard. Rosauer had to regularly travel to New Mexico to get her tree fix. “After living in Texas, I never took trees for granted again,” Rosauer said. “Before we moved, I knew that when I looked out my window, I didn’t want to see anything but trees. Surrounded by trees, I can really relax and feel safe. It’s a big, extended, safe nest.”

After moving to western North Carolina six years ago, Rosauer’s interest in capturing natural giants photographically took off in earnest. A retired magazine editor, economist, and attorney, Rosauer began to scrutinize trees as part of her photographic process. “I began to really look at trees, and to really study them as part of my pictures,” she said. Rosauer’s portfolio of tree photographs expanded to the point that occasional gallery showings were just not enough. “I have so many photos to share, that I had to make a book to show them,” she said. “Even now with the book, it’s still not enough. 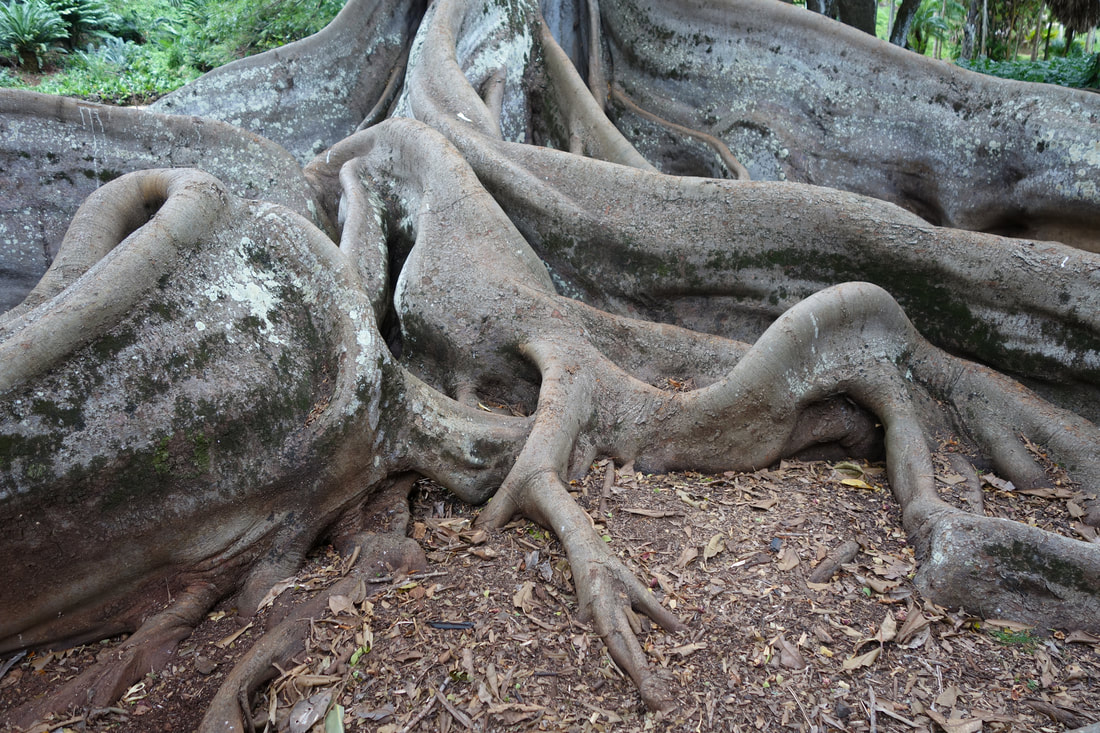 The exposed roots of Moreton Bay fig trees are a continual source of inspiration for photographer Ruthie Rosauer. The specimen pictured was photographed by Ruthie Rosauer at the National Tropical Botanical Garden in Kauai.
​(Photo courtesy of Ruthie Rosauer/Provided
The 167-page, soft-cover book bursts with more than 140 color photographs culled from the thousands of digital shots Rosauer has taken since 2009. Capturing the endless variety and beauty of trees, each chapter celebrates various parts of trees, such as roots, leaves and Rosauer’s new passion: bark. “I am besotted with bark,” she said.

​For Rosauer’s photographic inspiration, nothing beats the Moreton Bay fig tree and its sinuous exposed roots. “Beyond simple vacation photos, this is the tree that started me really taking tree photographs,” Rosauer said. “This tree got me saying, ‘this is art.’ I shifted from nice photographs to photographs that had beauty with a capital ‘B.’
Photographer Ruthie Rosauer has dedicated a whole chapter to tree bark in her new book dedicated to the beauty of trees. Pictured (L) is the bark of a monkeypod tree. The trunk of a paperbark maple (R) photographed by Ruthie Rosauer at Bullington Gardens.
​(Photos courtesy of Ruthie Rosauer/Provided)
A favorite photograph of hers in the book is of a tree much closer to home: an eastern redbud at the North Carolina Arboretum. “When I saw that tree, I dropped to my knees in awe. It looks so powerful, so strong. It didn’t need any embellishment; it’s almost regal,” Rosauer said.

​Another arboreal standout is the Sargent’s weeping hemlock at Bullington Gardens. It’s featured in the book’s chapter on “Shapes.” “I love the way the bark makes things that look like eyes,” she said. “It has faces all over.” 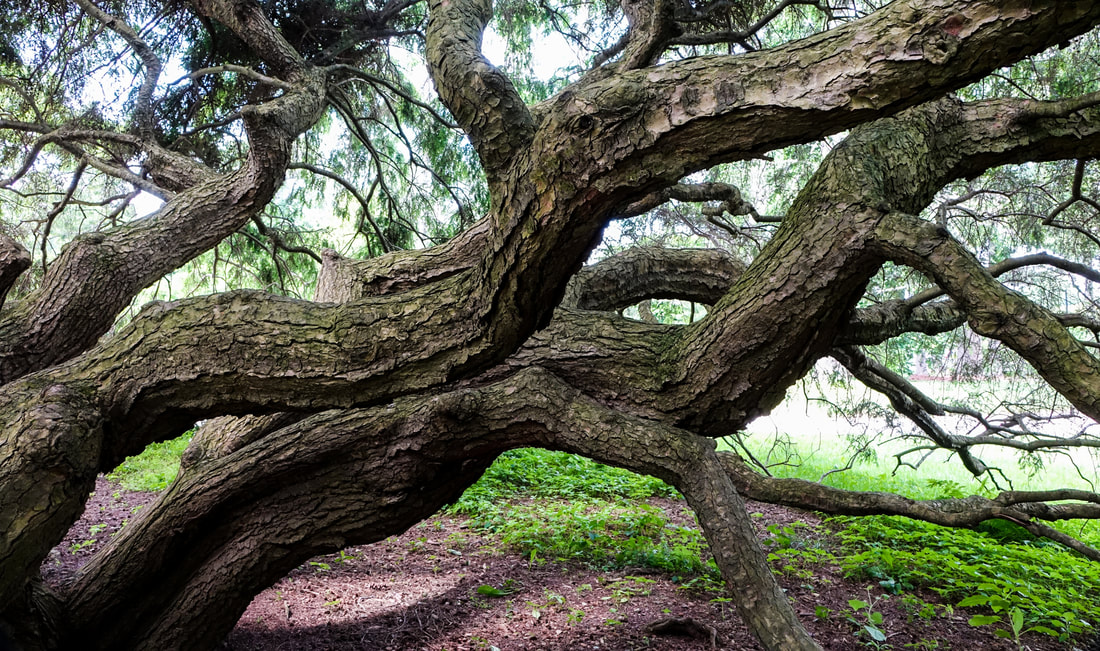 A Sargent’s weeping hemlock photographed by Ruthie Rosauer at Bullington Gardens.  (Photo courtesy of Ruthie Rosauer/Provided)
As a way to set off the photos, 25 original poems are interspersed throughout the book’s pages.

“I solicited poems and received submissions from 90 poets, some with multiple poems,” said Rosauer. “When I read a poem that I really liked, it was amazing how often it was about a specific tree that I already had a photo of.” Included in the book are four poems by Carol Pearce Bjorle, an Asheville-based musician and writer; one of her poems inspired the book’s title. While Rosauer was taking cello lessons from Bjorle, she had shared some of her photographs. In turn, Bjorle shared her poetry. Born of this mutual appreciation of the other’s creativity, together they came up with the idea to create a book to share with the public.

“We were both impressed with each other and put together our first ‘Poemscapes’ at Calvary Episcopal Church in Fletcher,” said Bjorle of their collaborative events. The initial event raised money and supplies for Calvary’s food pantry. “We like the idea of giving and doing good by using our art.” Another “Poemscapes” event followed at the Hendersonville Main Library. Since then, they’ve presented numerous Poemscapes programs. “I usually play the cello first, then photos are shown and I read poems along with them,” said Bjorle. “I think it is a wonderful, peaceful event. This is beautiful photography accompanied by poetry.”

Rosauer hopes people take away a few simple things from her photos. “First, and foremost, I hope they have a sense of refreshment from looking at these trees,” she said. “Second, I hope it leads to a deeper admiration and respect for trees. Maybe it may broaden out to action, like planting a tree or donating money to protect our trees.
​
“I just hope everyone is moved by the pure beauty of trees.”
Preview The Book – THESE TREES
Copyright © 2019 Ruthie Rosauer Photography
Site design by Gary Perrone • rareprogeny@gmail.com